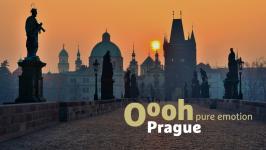 Prague Information Service, now Prague City Tourism (PIS – PCT), is changing its previous visual style, as well as its name and logo. This will make it one of the most modern organisations promoting city tourism in Europe.

The new form of organisation represents a dynamic, and yet unambiguous symbol which, in combination with a new marketing style for Prague in the area of tourism, will significantly improve awareness of the city, both at home and abroad.

The new English name is Prague City Tourism (PCT). The Czech title remains the same, but it is an attempt to eliminate the abbreviation for Prague Information Service, as this is quite inappropriate in English. “In many ways the current structure of activity bears no resemblance to the institution set up more than 50 years ago. Therefore, the new English name Prague City Tourism has been added to the traditional Czech title. In the preparation of new campaigns the activity of the organisation will thus be better appreciated, both at home and abroad,” explained Václav Novotný, Deputy Mayor and Chairman Prague City Council Committee for Development of Tourism.

The new symbol of Prague City Tourism is a stylised signpost, which depicts Prague as a crossroads of cities. It symbolises the four points of the compass and the four seasons. It also represents the four basic groups of visitor to Prague, i.e. young people, families with children, senior citizens and special interest groups, as well as the four basic functions of the organisation – marketing, PR, specialist activities and operational services.

The “new coat” for PCT was created by the Dynamo Design studio, winner of the competitive tender process which attracted twelve submissions. The new logo presents the organisation as a modern and internationally comprehensible tourist board. Along with the new communication image of Prague for the tourist industry, this will present Prague as a novel and interesting destination, with reference to an important and top-quality tourist guide – Prague City Tourism,” said Nora Dolanská. It’s worth mentioning that the head of the Dynamo Design team is Libor Jelínek who, as a student, designed the new logo for the City Library.

What attracts tourists to Prague?

Prague is magical, diverse and inspiring, but within itself it hides something indescribable, the genius loci of Prague are hard to express in words. The new visual style of Prague as a tourist destination is therefore based on the emotions, feelings and experiences of its visitors. The clear, positive and internationally understandable design is backed up by the promotional slogan “Pure Emotion”. A variable concept for the promotion of Prague in the field of tourism presents the city using interjections (Oooh, Wow, Mmm, Yeah, etc.) and thus accentuates the unique and magical atmosphere of the city. This open system also makes it possible to aim at specific target groups and their particular interests (Yum – gastronomy, Yippee – children, Shhhh – music, etc.)

“On agreement with representatives of Prague City Hall, the domain name prague.eu, previously relating to the City Hall portal, has been transferred to our organisation. I believe that shortening and simplifying the name of our web server from praguewelcome.com, which will take place during November 2013, will increase its visibility, both at home and abroad,” explained Dolanská. The prague.eu portal operates in seven languages. Along with the change of domain name, the ending of the organisation’s email address will change from @pis.cz to @prague.eu. The original links will be effective for another six months.

a Prague non-profit organisation established on 1st Jan 1958 as an independent cultural/information and education body, the aim of which was to promote tourism in Prague. At present, the organisation is transforming into a marketing organisation, the main aim of which is to promote the city of Prague as a tourist destination, both within the Czech Republic and internationally. An important focus of activity is the provision of quality information on the range of tourist facilities in Prague and provision of relevant services for current or potential visitors to Prague.

Dynamo Design Studio is a renowned Prague studio specialising in branding, corporate identity design and visual presentation. Dynamo Design has many years of experience, well-proven methods and a creative team comprising of university of arts graduates. The clients of Dynamo Design are multi-national companies, medium-sized and small companies and state institutions. The studio is regularly nominated for the Czech Grand Design prize for its projects.