Prague Invites Spectators Back into Theatres Through Virtual Reality 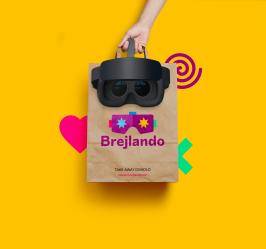 VR glasses from the project Brejlando

Prague City Hall, together with the Brainz Studios creative group, has today presented the globally unique service called Brejlando. It will offer experimental theatre experiences to its spectators in virtual reality (VR). With the help of state-of-the-art technologies and borrowed VR glasses, everyone can immerse in watching selected performances from Prague theatres from the comfort of their homes, as well as from a completely new angle - right from the stage, in close vicinity to the actors. The service is intended to help theatres and their fans overcome these difficult times of limited operation. However, at the same time, the initiators believe that they are establishing a new international trend that can become a permanent part of the theatres' offer.

The combination of virtual reality and culture is not new in the Czech environment. In recent years, Czechia has become famous for several successful virtual reality projects. One of them is the creation of experimental 360° musical experiences from the Brainz Studios, which also attracted the attention of Hana Třeštíková, Councillor for Culture and Tourism in the Capital City of Prague, Councillor Třeštíková states that "Virtual reality offers endless possibilities to take the spectator practically anywhere and give them the feeling that all events are happening around them and only for them. That's why we joined forces with the Brainz Studios creative group, the Czech leader through these technologies, on behalf of Prague, and in the Brejlando project we bring a new dimension to the great cultural content of our city theatres".

The uniqueness of Brejlando lies primarily in the manner in which a virtual reality theatrical production is shot. "It's not an online broadcast of a theatrical performance, but a staging experiment in virtual reality. It is really a new form of experience, or the transfer of information and energy between the actor and the spectator. In each performance, we try to find a special key for its transfer to a new and not yet explored medium, which offers many interesting opportunities", describes Petr Hanousek, the VR director and creative producer of Brejlando.

"Together with the theatre director, we'll actually dismantle the existing work and rebuild it. Almost from the beginning. We shorten the text to approximately one hour of footage, divided into twenty-minute parts. We invent scenes to support the viewer's 360-degree view as much as possible. In the same sense, we also totally change the choreography. For actors, it is a unique opportunity to play a theatrical role in a completely different concept, whereby they have to find a fine-line between the filmmaker's and theatrical approach to the character”, explains Petr Hanousek.

The viewer looks at the scene through the eyes of a 360-degree camera. It is at the centre of everything, the actors move around it and play the scenes towards it. Lighting and surround sound recording are also set accordingly. Compared to a classic visit to the theatre, therefore the spectator has an essentially physical experience, as the actors direct their monologues and views directly at them. "During parallel acting events around the entire stage perimeter, then the spectator can choose what they want to watch at a given moment. So even if each viewer receives the same content in their glasses, the experiences of the two spectators will never be the same". adds Petr Hanousek.

Brejlando starts with a recording of the Hamlets of the Na Zábradlí Theatre (directed by Jan Mikulášek) with Petr Čtvrtníček, Jana Plodková, Jiří Vyorálek, Jakub Žáček as well as other actors and Perníková chaloupka (Hans and Gretel) of the Minor Theatre (directed by Jakub Vašíček, Tomáš Jarkovský), with Petr Stach and Monika Načeva. Twice monthly, more productions will be added to the offer. For example, Drábkovy a Královy Elefantazie (Drábek's and King's Elephantas) from the Municipal Theatres of Prague, the play Pusťte Donu k maturitě! (Let Donna go to the Graduation!) directed by Tomáš Dianiška from the repertoire of the Pod Palmovkou Theatre or a theatrical adaptation of the famous film Ucho (The Ear) of Jan Procházka, presented by the Theatre in Vinohrady directed by Šimon Dominik. A number of other Prague scenes have already expressed interest in participating in the project. Therefore, the service becomes a full-fledged distribution platform that is not only open to Prague's city theatres.

"Theatres have been closed for over a year. For this reason. we have been looking for ways to provide people with a theatrical experience and simultaneously support theatregoers financially. If spectators cannot go to the theatre, we'll send the theatre to their homes. As far as I know, this is the global premiere of such an act. I believe that this innovative theatre concept will complement the cultural offer even at a time when the theatre halls are full of people again," complements Hana Třeštíková.

Tickets can now be purchased in advance on the GoOut.cz network. The "take-away theatre", i.e., selected performances and VR glasses, and then can be enjoyed by the first enthusiasts in the comfort of home from Monday, March 29th. Glasses with a theatrical production will be delivered to them on the chosen day in the early evening by the project partner - the Liftago company. The next day, a courier will come in the morning to take their glasses away again. The service is only currently available in Prague, in the future the creators plan to expand the distribution. Ticket prices range from 599 to 1,399 CZK, depending on the chosen variant and the number of VR glasses ordered. Each returned pair of glasses will then undergo a certified three-phase disinfection before being prepared for other customers.

According to Prague City Councillor Hana Třeštíková, a project from Brainz Studios and Brejlando, has the potential to become a long-term part of the theatre offer and enables those who cannot get to the theatre for any reason to see a number of popular, long-sold out productions.

Photos and other details can be found here:

The losses of municipal contributory theatres in 2020 were approximately 210 million Czech crowns compared to 2019, which is a 68% drop. The City of Prague compensated these losses of the organisations by increasing the non-investment contribution in 2020 in the amount of 90.7 million Czech crowns. The city's contributory theatres did not receive state compensation in 2020; these options were excluded by the rules of both the Covid-culture programme as well as compensation intended for non-profit organisations. Currently, the City of Prague is in negotiations with the Czech Republic Ministry of Culture in relation to the possibility of compensating municipal theatres on a one-off basis.

Approximately 800 employees are employed in the Prague contributory theatres, whereby 150 of those are actors. The entire sector of the cultural and creative industries in Prague in 2019 employed around 46,000 people. Despite government restrictions and closures for the public, the city's theatres have been working intensively since autumn 2020 not only on cost savings, but also on creating new content.

In addition to the increase in current expenditures of contributory organisations in 2020, the capital increased grants to those projects that drew them for year-round operation, in the amount of 20% of the originally allocated amount, i.e., a total of approximately 40 million Czech crowns. Other individual earmarked subsidies, intended to help the cultural sector, amounted to 7.5 million Czech crowns.