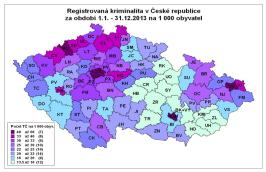 Police suggest the cause of the crime increase is due to the amnesty. It is a fairly common occurrence. The highest crime rate was noted after the amnesty between 1989 and 1990.

The highest rate in Prague

Crime concentrates in larger agglomerations and is therefore highest in Prague. According to a Deputy Chief of Police plc. JUDr. Václav Kučera one forth of all crimes occur in the city. Comparison between 2012 and 2013 showed increase in all the Czech regions (apart from Hradec Králové region). The highest increase was in Prague (by 13.4 %), followed by Ústí n. Labem region (8.8 %) and Liberec region (7.4 %).

Amnesty not the only one

There are many factors and causes that influence the registered crime situation in the Czech Republic. “In the long-term the crime statistics are influenced by society´s life style (consumer life style, misuse of addictive substances), new trends in crime, and mostly by legislative provisions of the Criminal law, and criminalisation or rather decriminalisation of a specific behaviour. Criminal trends are also influenced by police activity and available resources. Statistically it manifests in crime clarification, in the rise of revealed latent crime (e.g. drug crime), and also in prevention,” explained Mr Kučera.

Clarification is over 40 percent

Most damage caused by economic misconduct

The largest share of crime is shown to be property offences, however, economic misconduct resulted in the largest financial damage even though it only made 9 % of the total crime offences (their damage amounted to 67 % of the total). 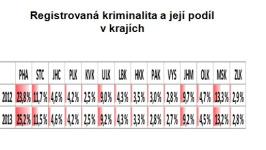 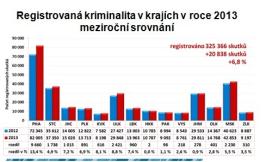