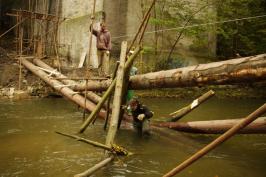 The August floods in the town of Chrastava in Liberec Region caused damage amounting to 1.5 milliard CZK, out of which 181 million affected the property of the town. The flood damaged 12 bridges on the River Jeřice, Lužická Nisa and Vítkovský Stream. Four of these bridges were completely destroyed, including the main ones. All the seven footbridges disappeared without leaving a trace.

The idea to help Chrastava came from the Deputy Mayor of Prague Pavel Klega and his friend Prof. Architect Martin Rajniš. “I have to admit that in the multitude of e-mails we were getting at the time of the floods I overlooked the e-mail mentioning the possibility of this construction,“ said the Mayor of Chrrastava, Michael Canov.

“It wasn’t until a few weeks later, when I was doing a bit of catching up, that I noticed the e-mail and replied immediately. However, I did not have much hope. Luckily it all has become a reality.” Within a very short space of time a project was made for a special movable bridge called the transporter bridge over the Lužická Nisa, which will be financed from private sources in the flood-destroyed area.

Transporter to replace bridge and become an attraction

“The bridges that were destroyed make life difficult for the inhabitants of the region. This is why we offered help, as we, ourselves, have experience with the destructive flood in 2002. The great thing about the transporter bridge is the fact that it is the fastest possible solution,” said Pavel Klega. Transporter bridge is a means of transport with a sophisticated hoist. The trolley’s drive is ensured by the passengers themselves, who pull the rope. This mechanical system significantly lowers the chances that it would break down. It is the first device of its kind in the Czech Republic and since it is located on a touristic trail, it is likely to become a touristic attraction as well.

Who will make use of it?

The first Czech transporter bridge will replace the Andělská Hora footbridge, demolished by the flood, over the Lužická Nisa. The construction will only take 26 days, so on 10th October 2010 at 10:10 a trial operation will be launched. “The transporter bridge will be used by the inhabitants of the area on their way to Machnín-Hrad railway station. For the time being, they have to take a very long detour. They will be able to use the transporter even with bikes,” said the Mayor.

Professor Martin Rajnyš commented on the new transporter bridge: “I got inspiration from the construction by Prof. Mirko Bauma, who built a similar transporter bridge in Ruhr-Gebiet on the Niers in 2003. He is Czech and we studied together. Unlike the transporter on the Niers, which is metal, the Chrastava transporter bridge will be made of wood,” Martin Rajniš explained. In Germany, they had 70 000 Euro. In Chrastava, thanks to the support of various companies and also e.g. Pavel Klega and his wife, the amount needed for the construction was only 600 thousand CZK.  “A wooden structure is cheaper and fits better into the surrounding countryside. Although it is made of wood, it can last up to forty years,” said  Martin Rajniš, who waived his royalty fee.

As if cut out for Prague

A transporter bridge can be used to cross watercourses, ravines, etc. Prof. Rajnyš sees a potential use of transporters in Prague. “For instance on Císařská Louka instead of a ferry or elsewhere.” According to Pavel Klega, this device could become attractive as part of cycle routes or in parks to cross watercourses. “It certainly is a great inspiration and a quick and cheap solution,” added Pavel Klega. 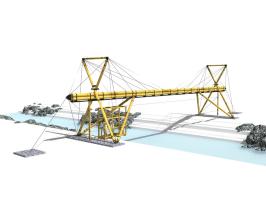 A transporter bridge is a transport system using a gondola (trolley) slung from a tall span to overcome an obstacle. It is a kind of modification of a cable cabin.  Andělská Hora transporter bridge will be able to transport up to 300 people per hour. The capacity of the cabin is six people or eight hundred kilograms.

The construction will cost 649 thousand crowns that will be paid for by sponsors, including dozens of Prague companies and private persons.  The transporter bridge will be prepared for the possibility of another flood. The trolley can be lifted with a hoist above the level of the 500-year flood. What is more, except for the concrete foundations, the system is storable, which means it can be relocated anytime and used somewhere else if needed.