The Jerusalem Synagogue Reopen to Public 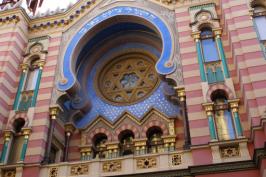 On 1st April, a unique cultural monument opens to the public in the New Town, Jeruzalemská Street 7, Prague 1.

This synagogue has been serving as a worshiping place for the Jewish Community of Prague for more than one hundred years. The idea to build the synagogue came with the „ Society for a New Temple“ which was established in 1898 after the rehabilitation reconstruction of Josefov had started and there was a need for a synagogue that would replace Cikánek’s, Velkodvorská and New Synagogues. In January 1899 the society bought an old house in Jeruzalemská Street as the land for a new building. The construction of the synagogue took place between 1905 and 1906. The author of the project was Vienna architect Wilhelm Stiassny and the construction was realised by Alois Richter at the society’s expenses. The Jerusalem Synagogue is today an interesting example of the free Art Nouveau stylization of Maori style morphology, which is rare in Europe.

During World War II, the Jerusalem Synagogue served as a storage for confiscated Jewish property and thanks to this fact it was partially saved from devastation. In the last few years, the synagogue was under reconstruction at the expense of the Jewish Community of Prague. The synagogue is open to the public during the summer months, concerts and artistic exhibitions are held there as well.

The Synagogue is open daily except Saturdays and Jewish holidays