Ridley Scott Restricts the Metro (Portal of Prague)
Home: Transport: Getting Around 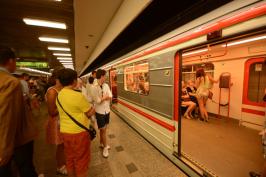 Prague Transport Company (DPP) has accommodated a request from a Hollywood production group headed by Ridley Scott. To enable a complex shooting, schedule services on line B will be restricted, especially at Andel station and the section between Smíchovské nádraží and Florenc. Metro services will be restricted between 23rd and 25th August, but only in the late evening and early morning.

Filming will take place on the stated dates, i.e. Fri- Sat and Sat-Sun from 10pm-8am. During this time the Metro line between Smíchovské nádraží – Florenc will be closed. Then from 8am-10am Metro trains will pass through Andel station without stopping. After the film crews have cleared the area the Metro will return to normal service.

“We are pleased that Ridley Scott chose to shoot in Prague and our Metro, which has already featured in several Czech and foreign films. His producers originally wanted to film on line C as well, but we didn’t want to inconvenience our passengers so much, so only line B was chosen on the last but one holiday weekend when there are fewer people in Prague. Besides this, they will only be filming on the Metro in the evening and morning hours, on the Smíchovské nádraží – Florenc section. Of course, we have arranged for alternative transport for passengers during the closure,” said Milan Křístek, General Director of DPP.

The famous director’s new film, Child 44, is being filmed in several locations in Prague and the Czech Republic. Prague Metro will thus welcome the film-makers on the penultimate weekend in August. The crew of Child 44, which according to the State Cinematographic Fund plans to spend about  500 million CZK in the Czech Republic, has agreed to compensate Prague Transport Company (DPP) for loss of income, costs relating to alternative XB tram transport and expenditure on the production of information material to notify passengers of service cancellations on line B.

Thank you to the people of Prague

“Shooting a film is very demanding, and often necessitates the temporary closure of streets, squares, bridges or Metro stations. We would therefore like to thank DPP and Prague City Council for their kindness, but also all the passengers for their understanding of the temporary closure of the Metro,” explained David Minkowski of Stillking Films, which is responsible for organising filming in the Czech Republic.

The filming schedule was chosen by DPP in order to least affect the public, as there are fewer passengers on the Metro during holiday weekends. The temporary restrictions to Metro services will be fully substituted by tram service XB, which worked well during flooding in June.

“All the major cities of the world know that film-maker’s interest is a great opportunity for the city’s reputation. Transport authorities in London. New York and Paris even have specialised divisions which frequently organise filming on the Metro. Tom Cruise, for example, recently brought traffic to a complete standstill in Trafalgar Square and the RAF even lent a helicopter to the makers of the film “Edge of Tomorrow” so that Cruise could land in this London landmark,” explains Minkowski.

Ridley Scott is coming to the Czech Republic to shoot the film Child 44 with a budget of 940 million CZK, of which roughly 500 million will pass into the hands of Czech producers and service providers. The cast of the film includes Hollywood stars Tom Hardy, Naomi Rapace, Gary Oldman and others. The Director if the film is Daniel Espinosa, while Ridley Scott is the Executive Producer.

Films shot on the Metro

Filming on Prague public transport is quite a common occurrence. In recent years it has been mainly Czech film projects set in the present – such as Gympl (Grammar School), Nevlastní bratr (Half-brother), Venkovský učitel (Village-school Teacher), Hrubeš a Mareš jsou kamarádi do deště (Hrubeš and Mareš are friends in hard times), or Román pro ženy (A Women’s  Novel).. Filming took place in Florenc, Staroměstská, Háje and Chodov stations, and always during the night.

London has a specialist division for handling film-makers’ requests to shoot on the Underground. The best-known films of recent years include Bridget Jones’s Diary, Skyfall, Atonement, Bourne Supremacy, Billy Elliot, V for Vendetta, Harry Potter and many others.

New York also has a specialist film division. Besides film work on many famous films, staff of New York Metro also helped with the sale of decommissioned trains for the film crew of Die Hard with a Vengeance with Bruce Willis, and Money Train with Woody Harrelson and Wesley Snipes.

A cult film which has found a place in world cinematographic history is the Hungarian film Kontroll (2003), the main part of which takes place on the Budapest Metro, which is almost identical to the Prague Metro, including the Russian-built trains. The film was directed by Nimród Antal and won a special “Award of the Young” at Cannes Film Festival this year and was featured in the Variety Critics’Day section at Karlovy Vary Film Festival.