10th Anniversary of Prague Ferry Boats (Portal of Prague)
Home: Transport: Getting Around 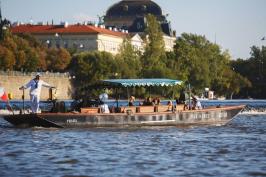 The first ferry boat P1 began its operation on 1st July 2005 between Sedlec and Zámky. One year later, another ferry crossing P2 was established between Podbaba and Podhoří and has become the most frequently used ferry in Prague. Other ferry boat crossings followed elsewhere in Prague.

The celebrations marking the renewal of Prague ferries, which have been operating for ten years as part of Prague Integrated Transport, take place on 25th June 2015 at V Podbabě wharf. On Thursday afternoon, approximately between 4 and 8 p.m., you can try out a cruise on a Venetian gondola, cook sausages on a fire or taste Suchdolský Jeník, which is beer brewed at the University of Agriculture.

Over the past 10 years, the Prague Integrated Transport ferry boats have transported over three million passengers and hundreds of thousands of bikes and prams. Another ferry boat crossing might be added this year to connect Holešovice, Štvanice Island and Karlín.