Home: Transport: Getting Away: Railway 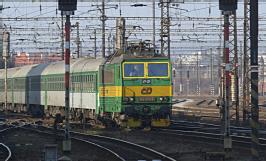 Prague is one of the most important hubs of railway transport in the Czech Republic for long-distance journeys and for suburban transport. Recent investments in this ecological means of transport aim to enhance its influence within the city and suburban public transport.

Railway transport in the territory of the Czech Republic is operated by the company České dráhy, a.s. (Czech Railways, Joint Stock Company).

How to purchase a ticket

Inexperienced passengers can obtain information on how to purchase tickets on the website of Czech Railways. The ticket can be bought either in the ticket office, via the internet or by using the electronic purse. Information about prices of domestic tickets can be found on the IDOS website; they are stated next to the information on individual trains, or in the electronic calculator on the website www.jizdenka.cz.

Hlavní nádraží - The Main Railway Station (also called Wilson Station) is in operation since 1871, the main building in the Art Nouveau style was built between 1901-1909, is located near Wenceslas Square. It is the departure point for trains to the whole of the Czech Republic. It offers various services, such as restaurants, shops etc. The entrance to metro line C is located right in the foyer station. The station is called Hlavní nádraží.

Masarykovo nádraží - Masarykovo Railway Station is the oldest train station in Prague still in operationis (since 1845), is located near the Main Railway Station and Florenc Coach Station. It mostly serves the region to the north and west of Prague. An entrance to metro line B is right beside the station called Náměstí republiky.

Praha-Smíchov - Smíchov Railway Station commenced operations in 1862, is located outside the city centre in Nádražní Street. It mostly serves the region to the west and south of Prague, with a number of tourist attractions - historic railway line Pražský Semmering. The station is served by metro line B.

Praha-Holešovice - Holešovice Railway Station is the youngest railway station in Prague (put into operation in 1985). The station shares its hall with metro line C, the station is called Nádraží Holešovice.