Prague to Welcome Airbus A380 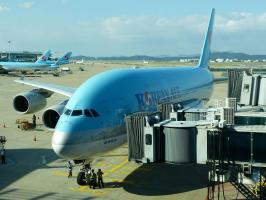 The largest aircraft of the world, the Airbus A380, will now be a regular visitor to the Prague’s airport as initially reported by the Euro magazine.

Due to the large size of the aircraft, the Vaclav Havel airport has been under reconstructions recently: there is a new luggage unloading zone, and some modifications are planned for the gate of terminal 1. Airbus A380 has a capacity of 407 seats; it is 73 meters long and its wing-span is 80 meters.

The Airbus has appeared in Prague during its promotional flight, but it will provide its regular services for passengers travelling to Seoul from the summer 2015 onwards.